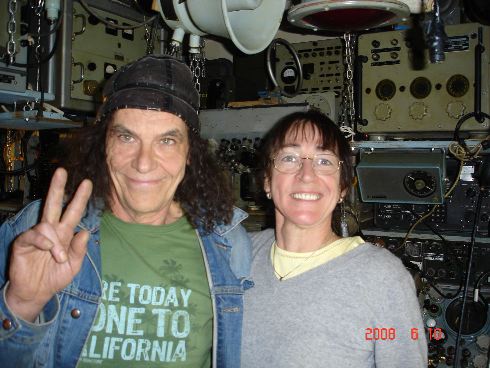 1. I will travel at my own expense to Hutchison's laboratory (shown above) in the Vancouver area.
2. I will bring 3 video cameras with tripods.
3. Hutchison will describe and point out his apparatus components on video. I will have unrestricted access to the laboratory area, being allowed to video anything which piques my curiosity.
4. Hutchison will then produce the levitation of a steel wrench, as depicted in at least one of his previous videos. The wrench must fly upwards off of the table.
5. During the levitation demonstration, I will video tape continuously on all 3 cameras. One camera will be aimed at Hutchison as he operates any controls, one camera will be aimed at the wrench, and the last camera I will hand-hold, aiming at anything I choose.
While Hutchison formerly claimed to have had trouble recreating the Hutchison Effect, as of this past January, he claims to be able to reproduce it "regularly". I don't believe him. I think John Hutchison is a fraud.
Judy Wood is also a fraud. Wood claims that a weaponized version of the Hutchison Effect was used to destroy the twin towers. In trying to discredit me, and rehabiliate the Hutchison Effect, Judy Wood has issued demonstrably false claims about me, e.g. calling me a "plagiarist" with respect to my music writing.
I have reproduced the "Hutchison Effect" for exactly what it is - video fakery. Judy Wood created this page about my efforts, and intentionally left off most of the evidence that I supplied her with, a clear case of scientific fraud on the part of Judy Wood.
This is an opportunity for Hutchison/Wood to prove it up, and have a very nice payday. I warrant that I have I line of credit exceeding $100,000. Offer stands until the end of time.
Sincerely,
Alexander "Ace" Baker
cc
Judy Wood
John Hutchison
Jerry Leaphart
Morgan Reynolds
Jim Fetzer

Hutchison claims to have discovered a previously unknown energy effect capable of, among other things, levitating solid objects. Hutchison claims to have a laboratory of equipment in his Vancouver-area home capable of producing the H-Effect under his control. Hutchison has produced various videos purporting to depict various manifestations of the H-Effect, including one in which a steel wrench suddenly moves upwards, off of a table, into the air, flying out of the picture.

Baker claims that Hutchison is a fraud. Baker claims that Hutchison’s videos depict ordinary events, cleverly photographed in such a way as to make them appear unusual. According to Baker, the “levitating” steel wrench is an effect achieved with an upside-down camera. The wrench is held in place on an upside-down table, via an unseen magnet, then released and allowed to fall down, thus appearing to fall upwards, claims Baker.

Hutchison denies all accusations of fraud, states that his videos are legitimate, and that the H-Effect has been witnessed by many, including military personnel.

Hutchison agrees to demonstrate a levitating steel wrench in the presence of Baker. Baker will, at his own expense, travel to Hutchison’s home/laboratory, arriving at a mutually agreed upon day and time.

Hutchison agrees to be home at this time, and prepared for the demonstration.

The demonstration is said to begin the moment Baker arrives, and will last not more than 1 hour. Hutchison agrees to allow Baker to make audio/video recordings at all times during the demonstration. Hutchison agrees to allow Baker to observe and record audio/video wherever Baker wants, including under things, behind things, etc.

Hutchison agrees to then place a steel wrench on a table.

Hutchison agrees to allow Baker to verify to his own satisfaction that it is an ordinary steel wrench, allowing Baker to lift it, and examine it.

Hutchison agrees to then allow Baker to stand next to Hutchison during the time in which Hutchison operates any necessary controls.

Hutchison will then cause the wrench to move upwards off of the table, into the air at least 12 inches above the table. This levitation is to occur without anyone touching the wrench, and without any other normal means of lifting a solid object, e.g. by means of an attached string or wire.

After the completion of at least one levitating steel wrench, Hutchison will confirm that Baker was able to make a recording of the spectacular event. Hutchison will ask Baker, “Did you get that?” or words to that effect.

Baker agrees to, at that time, and under those circumstances, stop his recording, access the audio/video file, play it, and make sure that he “got it”. Baker agrees to then say to Hutchison, “Yes, I got it!” or words to that effect.

The demonstration is over when Baker says, “Yes, I got it!”, or one hour has elapsed since Baker’s arrival, whichever comes first.

Baker warranties that he has a line of credit in excess of $100,000. If Hutchison is successful in levitating a wrench, Baker will access his credit, and transfer $100,000 (U.S.) into the bank account of Hutchison, not more than 14 days after the demonstration.

Furthermore, if Hutchison is unsuccessful at levitating a steel wrench, Hutchison will give to Baker a digital video copy of the so-called “Boat Experiment”. This digital video shall be dimensions 720 x 480 in size, 29.97 frames per second, and will not contain any duplicated frames. It is to be delivered to Baker no more than 7 days after the demonstration.

Hutchison agrees that Baker will bring one witness of Baker’s choice. The witness will be allowed to observe the demonstration along with Hutchison and Baker.

Baker agrees that Hutchison will be allowed to invite as many witnesses as Hutchison would like, and that the size of his home/laboratory will accommodate.

Hutchison agrees that, whatever the outcome of the demonstration, Baker will, in perpetuity, own all intellectual property in the audio/video recording made by Baker. Other witnesses who choose to make recordings of their own, will each own their respective recordings.

Baker agrees to publish and make available for download his complete and unedited recording of the demonstration.

Hutchison agrees to never interfere with the publication and dissemination of the demonstration recordings.

That's a great challenge, but I doubt he will never accept it.