The Real Deal on Molten Metal

Understanding the limitations of video compositing helps solve another riddle

“Molten metal, flowing and in pools”. This was the eye-catching section heading in Steven Jones’ famous “Why Indeed” article that put the 9/11 Truth Movement on the map in 2005. “Who can deny that liquid, molten metal existed at the WTC disaster?” asked Jones, in an apparent rhetorical question.

Who denies it? Judy Wood denies it. Wood points out a number of problems with Jones’ molten metal evidence. This photo was used in versions of Jones’ paper with the caption “Workers evidently peering into the hot core”. 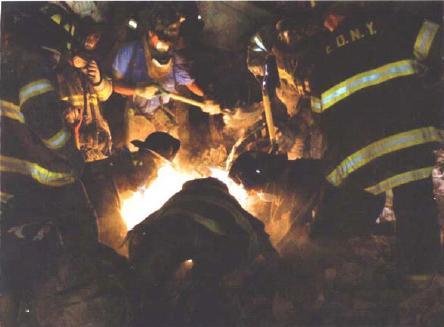 It turned out that this version of the photo had had the color balance shifted. The original photo looked more like this: 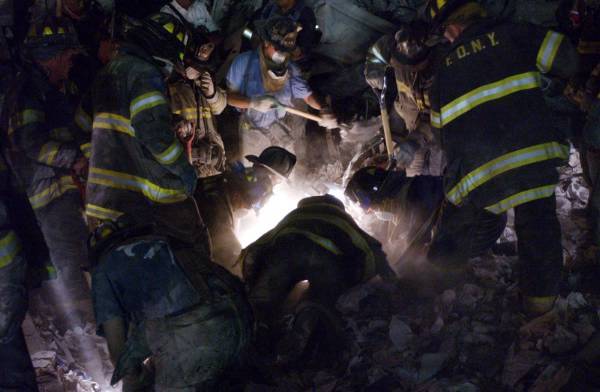 The workers are actually gathered around a searchlight.

Wood makes a big deal out of the lack of steam explosions. Water was sprayed at ground zero continually. Spraying water on molten metal will cause the water to boil rapidly, turning to steam and rapidly expanding in volume by up to 1600 times. She reminds us of the very dramatic steam explosion in New York City in 2007. If there was molten metal, why does the water not turn to steam?

And then there is this image, from NIST:

NIST admits in their documentation that the “intensity levels” were boosted. But Wood points out a worse problem – the molten metal is flowing from the wrong window! I suspect NIST photoshopped the image, specifically so that it would be discredited. How devious!

What’s the truth here? As with (no) flying objects, an understanding of the limitations of video compositing will help give us the answer. ABC news showed us a live, unstable video of yellow-hot molten metal flowing out of the south tower, just before it blew up. It is not possible to composite a flow of molten metal onto an unstable shot in real time. This is absolutely a real event, without doubt.

It is surely impossible for an office fire to heat anything up to yellow hot, which is around 1800 degrees F. The best explanation is that an incendiary, like thermate, was used to melt floor trusses. This would cause floors to sag, pulling inwards on the perimeter columns. This would be blamed on the super-hot fires, and was a key element in the NIST collapse initiation theory.

Showing that flow of molten metal was one of the 3 big mistakes made by the perps on 9/11 (the other 2 were Chopper 5 and the premature announcement of WTC7). We were not supposed to see molten metal. This was a big problem. There is absolutely no innocent explanation for molten iron or steel.

The fact that they showed it on the news was the only reason we ever heard one word about molten metal.

The task of destroying the case for molten metal was given to Steven Jones and Judy Wood. Their first step was to join the Scholars for 9/11 Truth, and begin arguing about whether aluminum glows when it is heated. Of course it does, and Judy was right. This would later pave the way for the official story to claim that the flowing substance was molten aluminum, from the airplane.

Jones began his disinfo by overstating the case for molten metal – “Flowing and in Pools”. No doubt there were pools of molten metal, but we surely don’t have any pictures of it. Instead Jones relied on statements by insiders, like Keith Eaton and Mark Loizeaux. Jones also brought dubious pictures, like the “hot core” flashlight shot, and the NIST “intensity levels adjusted” wrong window shot.

Then Jones proceeded to study dust samples and discover tiny iron microsphere. When iron is melted, the liquid can form tiny droplets that harden into a spherical shape. Absent melting temperatures, iron does not form microspheres.

However, supporters of the official story have pointed out that these tiny amounts of liquid iron could have originated innocently, for example by cutting torches used in the clean-up.

Jones eventually filed a “Request for Corrections” to the NIST report, but there was not one word on molten metal in the document. How very, very odd.

Judy Wood claims there was no molten metal at all on 9/11. I presented to her my idea that incendiaries may have been used to melt floor trusses. She responded by calling me on the phone and trying to convince me that the news videos must have been faked. This is impossible, as I’ve explained.

It was very, VERY important for Dr. Wood that there be no molten metal. Why? Using incendiaries to melt floor trusses would not itself rule out her DEW theory. I concluded that day, in December of 2007, that Dr. Wood was acting to rehabilitate the official story, by helping to destroy the case for molten metal.

Confusion is very important in any disinformation campaign. The next step was to falsly marry together the idea of molten metal, and the “fuming” that took place at ground zero for over 100 days, and may not have completely subsided even now. Absent any specific comments, we are left to assume that Steve Jones’ theory is that the fuming is aluminum oxide residue from an ongoing thermate reaction. It appears impossible that such a reaction could continue for even a fraction of that time. Further, as Dr. Wood has correctly pointed out, spraying water on molten metal would likely cause a steam explosion.

But . . . the molten metal may be unrelated to the fuming. Or they may be related only indirectly.  I think the demolition was nuclear, and that the fuming is an ongoing reaction, like the "China Syndrome".
There was molten metal on 9/11. We see it flowing in the news video. Neither Dr. Jones nor Dr. Wood appear the least bit interested in generating a viable theory of 9/11. Given the high concentrations of strontium and barium in the dust, a nuclear reaction appears to be the best candidate to explain the disintegration of the towers. Given the inward pulling of the perimeter, melting floor trusses appears to be the motivation for using some incendiary prior to the main demolition.

Judy Wood also makes a big deal out of claiming that there was no significant heat produced by the demolitions. In closing, I ask all to please view the following video of the WTC1 demolition. Note the large expanding mushroom cloud that pushes upwards and outwards, even blooming to the right. To the right in this video is west, and that would be against the wind. There is but one explanation for a cloud that behaves this way, and that is an extraordinary heat energy input.

How about a Hollywood movie with a China Syndrome-like theme. Using a Jane Fonda stand-in to make the connection?

Ace-- I'm glad to see you talking about the China Syndrome, but I am confused about your point on video compositing. If it is so hard to make composite videos from an unstable or moving camera source, why or how did they do it for the second hit with chopper 5?

Chopper 5 was mechanically stabilized, with a gyroscopic camera mount. It was very stable, stable enough to composite on without need of motion tracking. Mainly the camera motion is a pretty steady drift to the left.

There was no panning, no tilting, no focusing. Any of those things would rule it out. The helicopter is drifting as slowly as it can, flying fast would also ruin it.

By making very careful measurements, as I have done, you can detect slight instability in the motion of the Chopper 5 airplane. It's too subtle for the eye, but it can be measured.

The motion of the plane becomes slightly LESS stable when you remove the camera motion. This is an impossibility with a real airplane.

OK, thanks Ace. But still don't you think it was pretty risky for them to do it that way? Why didn't they just rely on ground shots? Was there an advantage to use the choppers?

I suppose the chopper shots are more dramatic, and the other chopper shot (chopper 7?), that was widely used, was "safer" as the south tower couldn't even be seen.

They had to use Choppers, otherwise everyone would ask, "Where were the news Choppers?"

Plus, Choppers can covertly hide the compositing equipment up where nosy people can't see it, unlike a news van.

I find it hard to believe they couldn't hide compositing equipment in a news van. Neither am I sure people would be so freaked if news choppers didn't get video of the plane. The sound issue is more convincing, but I'm not sure that completely explains it.

Also, not every angle is available from the ground. Far from it. There's traffic preventing vehicles from getting where they need to, buildings in the way, and people everywhere.

With a helicopter you can get the shot you want, rehearse it the week before, make your test shots, and go right back to the same location.

And, as I said before, if they didn't have helicopter shots, everybody would wonder where the choppers were.

A chooper shot looks more dramatic than a steady cam on a building. The chooper was arriving at the sceen. Like if it was all unexpected for the chooper crew. Giving the idea they "didn't" have time to prepare themselves.

A chooper shot can get a close up from the building, faster and easier, in whatever needed angle, with only blue sky as background. There was no room for chances.

A chooper shot doesn't bring the necessity to generate weird perspectives for the plane animation. A straight flight path was enough. Also easier and faster to process in a live shot.

The chopper shot was in fact what they used. So there must be a reason if it wasn't any of these already presented.

Good points, rs. The blue sky background with a straight flight path had to be a major consideration.

Really great blog! We all know 9-11 was set-up by the U.S. Government.

Please review our website at your earliest convenience. Any feedback would be greatly appreciated.