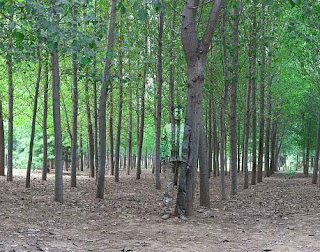 (click to enlarge)
In one frame he's allegedly painted himself to replace the portrait of Mao, and to match the arched gateway underneath. In the other frame, he stands further back, and blends into the wall. Notice, however, that the flags and the other people are identical in the two shots. They could not possibly have been photographed at two different times. This is irrefutable evidence that Liu has simply used photoshopping techniques to create his startling effect, at least in these two photos.
This is no great discovery on my part, I'm merely pointing out the obvious. Liu is no amateur. He didn't have to give the game away like this. He could easily have just used two different background pictures, instead of the same one twice. He understands that his trickery would be exposed by a comparison of these two images. He clearly wants us to "see through" what he's doing.
What of the people at the Eli Klien Gallery? Are they among the deceived, or the deceivers? Everyone knows that Photoshop would be a much easier method of achieving the Invisible Man effect than actually painting a person. And by the way, according to the story, Liu doesn't do the painting himself anyway, it is done by "an assistant". If any of Liu's art really is accomplished with actual painting, then a good deal of the artistic credit should go to the painter. However, I am sincere when I call Liu a genius.
There is surely fakery taking place, and I believe this is the important part of Liu's message. He is challenging us to contemplate the validity of what is presented to us in the media. He and the Eli Klien Gallery are inspiring us to see through it, while being bombarded with messages that the work is legitimate. Get it? The point is to test your ability to believe falsehoods when the truth is plain to see.
And so it was with 9/11. In case you haven't seen "9/11 - The Great American Psy-Opera", you should.
http://psy-opera.com
In particular, Chapter 7 "The Key", presents overwhelming evidence and explanation for why we know that the 9/11 airplane videos were faked using video compositing. Both the 9/11 airplanes and Liu Bolin's art present examples of the extraordinary ability of people to deny the truth when it conflicts with a belief system propagated by media. This phenomenon is called "cognitive dissonance". Artists who dare to provoke cognitive dissonance are my favorites. How about you?
(9/11 - The Great American Psy-Opera is rated CG for Cognitive Dissonance).
Posted by Ace Baker at 8:16 PM No comments: 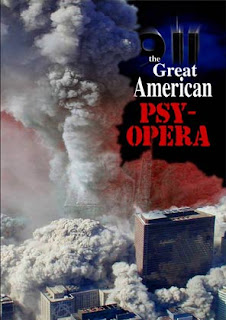 Osama bin Laden was allegedly killed a couple of days ago at his compound in Afghanistan. Before burying him at sea, gruesome pictures were supposedly taken of him with a bullet through the left side of his head. They're debating whether to release the photos.
9/11 "truthers" have long suspected that Bin Laden was a CIA asset, going back to his days as a pro-U.S. "freedom fighter" in the Afghan war against the U.S.S.R. FOX news reported Bin Laden's death on December 26, 2001. Who knows the truth? I certainly don't claim to. I doubt Barrack Obama knows the truth either.
What is clear is that they very much want us to believe that they finally got that bad guy. Here's my prediction:
They will officially decline to release the photos, citing concerns that it will foment anti-American sentiment. Then the photos will be "leaked", the classic method of getting us to focus on the issues surrounding leaks per se, while accepting the government lies as gospel.
Don't get me wrong. I'm not saying Bin Laden is still alive, nor am I saying he died long ago. I'm saying that I don't know, you don't know, and it's un-knowable.
Posted by Ace Baker at 10:33 AM No comments:

Yesterday the web exploded with proof that Obama's newly released "long form" birth certificate is a forgery. Clearly it has been hacked.
http://www.youtube.com/watch?v=7s9StxsFllY
The birth certificate, available on the White House website, is in PDF format. Opening the file in Adobe Illustrator allows us to see that the document was assembled in multiple layers. Usually a graphic artist will "flatten" a composited image for final output, merging all layers into one final picture. Apparently Obama's guys "forgot" to do that. Even had they flattened the layers, there are other glaring mistakes, such as the mismatching colors on adjacent characters.
Could the holy graphic artist really be so incompetent? I highly doubt it. They could make a perfect forgery if they wanted to, and could have done so years ago. They wanted us to obsess on this file. They question is, why?
I think it's a distraction, like Clinton's Monica Lewinski. It's also a lot like Larry Silverstein's "pull it" remark. For anyone who doesn't know, Silverstein was the the brand-new lease holder on the World Trade Center on 9/11. Speaking about WTC7 in a government documentary show, he said, "We've had such terrible loss of life, maybe the smartest thing to do is just pull it. And they made that decision, to pull, and then we watched the building collapse".
For years afterward, the 9/11 "truth" movement spent tremendous time and energy on "pull it". They said "pull it" was jargon from the controlled demolition industry meaning "initiate the demolition", as in "pull the building". They suggested that Silverstein slipped up, and admitted that WTC7 was blown up. How this supposed slip up was allowed to make it to an edited government documentary program was never explained.
The official story supporters echoed the subsequent explanation given by Silverstein's spokesperson. According to them, "pull it" meant "pull the firefighting effort out of the building". Why would Silverstein would have said "pull it" rather than "pull them"? Why was such an ambiguous statement in the show to begin with? If they had wanted us to have a clear statement, they surely would have given us one.
The only thing that makes sense to me is that Silverstein's "pull it" was a carefully crafted statement, designed to do exactly what it did: generate obsession and debate, while still having some plausible deniability. It was a distraction.
And so it is with Obama's birth certificate. It's a hacked up photoshop job all right. But the official story is that a software process of OCR (Optical Character Recognition) generated the separate layers in the file. It is true that the OCR (and/or "PDF Optimization") can generate layers recognized by Adobe Illustrator, but it cannot create anything remotely resembling what is seen in the laughable Obama birth certificate. Still, most people don't have the software, or will not bother to check it out in depth. For those inclined to support the official story, OCR is good enough.
The forged birth certificate is a lightening rod, designed to draw the fire, and keep us focused on that. Why? Are we supposed to forget about Libya? Is there a new war brewing? Are they planning to install a new president next election? Is it just an exercise in audacity, as if to say "Yeah, we forged it. What are you going to do about it?"
I don't know where Obama was born, and I don't care. I don't support what politicians do, regardless.
Posted by Ace Baker at 7:36 AM No comments: