What Idiots Fall for Stimulus Hoax?

Now it's time for the latest "Stimulus" deal from your government. Anyone capable of even a tiny amount of economic reasoning can figure out that this is just another method the elite to steal property.

The supposed idea of an economic stimulus plan is to raise the overall prosperity of the country by having the government print new money and spend it. The increased government spending creates new demand for those products and services that the government buys, which in turn will create new jobs for people working to fill that demand. These new workers will have new money to spend, which will increase demand for whatever they choose to buy, which will create more new jobs, and so on. This is known as the multiplier effect, and it was thought up by Keynes, and it's false.

It doesn't work like that. If you gave everybody $1,000,000 of new money, there still would not be any more houses, or food, or clothes, or any goods or any services than there was before. All that would happen is that the price of everything would go way up.

The cause of the current financial meltdown is the Federal Reserve System. By inflating the money supply, it artificially lowers the interest rate, which makes certain investments appear profitable when they are not. The Austrian economists have a complete theory of the business cycle (see Rothbard for example), and they alone predicted this crises. I highly recommend Thomas E. Woods' new book Meltdown.

In other words, the government and the Fed and their friends are stealing from everyone else.

He Gave Up His Life to Prove No Planes

This from an anonymous author. I can't verify any of this.

I wanted to relay a very brief personal story. I was living in Tampa after 911. Six months after 911 a young man flew a plane into the Bank Of America building in Tampa. I followed very closely what information was being released by the law enforcement, military, and the local media. I even contacted friends and workers withing those areas to find out even more information. What I found differed quite a bit from what I had read and been shown on tv.

The media and military told me that he was a depressed child. That he had left a suicide note claiming support for Osama Bin Laden, even though the media and law enforcement would not release the note for verification.

I found out that the young man gave up his life to prove that planes could not do the damage that was seen on 911. You wrote a note alright and it said exactly that. It said that he could care less one way or another about Osama but that he couldn't handle his own government and media lying to him to stage wars and death.

Sure enough, when his plane hit the BOA building it smashed into many sections that then fell to the area below. I actually saw the newscast from inside the office space that he hit. A desk 5 feet inside the window was untouched. What the young man wrote in his note proved that a plane could never do the kind of damage that was seen at the WTC's.

What happened? After speaking with reporters I found out that not even they were allowed to see the wreckage and took the word of law enforcement for what was on the note. The mother won a law suit against the makers of the depression drug he was on (6 million US children are on the same drug). That can only be described as payola. By getting that money she had to sign documents that said she would never talk about or sue anyone else with regards to this "accident". This young man gave his life to prove that his own government was lying, and they lied to cover up his statements?

Why Does Genghis Want Us to Think That? 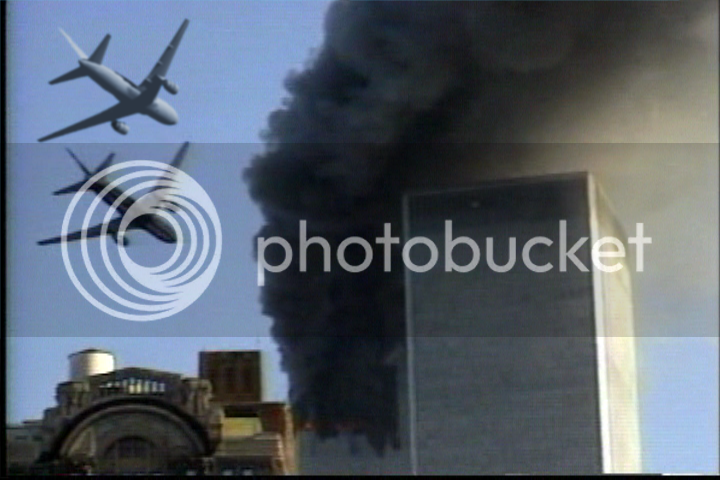 click image for larger version
Genghis is trying to get us to think that they put the wrong plane into the CNN shot, Park Foreman, etc. I've put a model 767 into CNN for comparison. The angle is almost perfect, maybe off by some fraction of a degree. Mine is not painted in UA colors at all, so no surprise the colors don't match.

I do find it suspicious that the bottom of the CNN plane is so gray, not blue like UA livery. Color matching is a common problem in compositing, de-saturating the colors down close to gray is an easy way to get overlaid objects to blend in.

But for crying out loud, it's a Boeing 767-200. There is not one detail on that plane to suggest it is anything other than a 767-200. It is patently absurd to think the composi-traitors would show us anything but a 767-200. They have flight simulators and stock models of 767's the same way we do. There's no way they would screw this part up. They screwed other parts up.

Genghis is just giving the "debunkers" ammunition to discredit no-planers, as it is quite easy to show that he is wrong about this. Genghis, the 9/11 airplane videos all show a 767. Every one of them.

We know the 9/11 airplane videos are fake, but not because of any wrong airplane models used.
Posted by Ace Baker at 8:34 PM 14 comments:

Genghis on the New and Improved Chopper 5

Last night I had a conversation with Genghis6199. Genghis, supposedly a no-planer, is a very well-known 9/11 researcher and videomaker. Here is his forum. Have a listen to our talk, and see if you don't think Genghis is trying to bully me into surrendering my theory for no good reason, while trying to rehabilitate the airplane hoax.
Ace Baker / Genghis conversation, part 1
Ace Baker / Genghis conversation, part 2
Ace Baker / Genghis conversation, part 3
I wanted to talk to Genghis about the NEW AND IMPROVED version of Chopper 5, the one with the plane in the wide shot. One previously available version (Hoffman/Salter) had no plane in the wide shot at all, while another previously available version (Avery/Lawson) had a plane visible in 3 frames during the zoom in only. The new version (Dr. Ebbets) is an interlaced version of the same VHS source as Avery/Lawson.
In an email to me, Genghis said of the new and improved Dr. Ebbets version:

"it's a legitimate find. it's authenticity is not in doubt."

This seems quite an odd comment for anyone, much less a supposed no-planer. This new version has appeared out of the blue, we have no idea who actually has the VHS tape from which it was made, or who digitized it. Why would Genghis not at least SUSPECT that an airplane was added to the wide shot? I think that's just what they did. I wouldn't be A BIT SURPRISED if they come out with a "new and improved" version of CNN Ghostplane. One that shows the columns breaking!
We do know that the new Dr. Ebbets version is cropped differently than the previous Avery/Lawson version. Why? It's suspicious, because the far right-hand edge (where the plane comes in) is cropped away now.
The chroma (color) of the Dr. Ebbets version is accurate, like its frame-blended predecessor Avery/Lawson. The Hoffman/Salter version has been brightened. So the new Dr. Ebbets ought to have finer detail than Hoffman/Salter, but strangely the detail is less fine. This strongly suggests that the quality of Dr. Ebbets was reduced, then enlarged back up to  720 x 480 dimensions. Why?
In fact, I not only SUSPECT someone added an airplane to Dr. Ebbets, I can prove it. The proof comes in attempting to recreate the lesser-quality versions from the higher-quality versions. I've already shown that brightening the old Avery/Lawson does NOT disappear the airplane, therefore brightening did not erase any airplane in the wide shot from Hoffman/Salter.
Genghis and I get into this in our conversation. And we learn several other very interesting things about Genghis.
The laws of physics dictate that thin-air holograms are strictly impossible, because any projected image needs something to reflect off of in order to go into your eye (or the camera). If Genghis can suspend the laws of physics to allow for thin-air holograms, why not just pretend that planes can meld into steel and concrete buildings? And that those buildings can then crush themselves into fine powder under their own weight?
Posted by Ace Baker at 5:42 PM 9 comments:

Did you record any major network news broadcast at 9:02-9:03 am Eastern time on 9/11/2001? This is the time the second alleged airplane struck WTC2.
I am not interested in any posted internet archives. I am not interested in any replays. I am only interested if you recorded a television news broadcast on your home VCR or other video recording device, at 9:02-9:03 Eastern.
The reward money is negotiable. I will wish to obtain a high-quality digitization of your tape. Please contact me via the email link at the upper right of this blog.
Sincerely,
Ace Baker
Posted by Ace Baker at 2:21 PM 4 comments: