John Lear and Jim Fetzer are working hard trying to convince us that the 9/11 airplanes could have been holograms projected into thin-air. 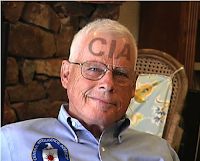 Thin air holograms are physically impossible. For a projected image to reach the eyes (or a camera), it must reflect off of some surface. Semi-transparent screens work for 3D teleconferencing. Particulate matter in the air can create a vaporous reflective region. You can use mirrors. But there is simply no way to get around the fact that the photons need to enter people's eyeballs.
There is no earthly reason to suspect that the military have image technology beyond that of Hollywood. But even if they did, they cannot defy physics.
It is more reasonable to think the military have aircraft more advanced than do the commercial airlines. If you are willing to consider the possibility of something thought to be physically impossible, why not just believe they have a 767 that can fly through steel columns like thin air? It's no more ridiculous than thin-air holograms.
Why would the the kindly professor Fetzer reject the presence of real airplanes based on the observed impossible physics, yet promote equally impossible thin-air holograms, especially when the correct solution (video compositing) stands written up and un-refuted?
http://911composites.wiki-site.com/
Furthermore, even assuming the existence of thin-air holograms, there are several data points that rule out this explanation anyway.
1. The nose out. Perfectly consistent with a real-time video compositing mistake, as explained in detail by me. How does thin air holography account for Pinnochio's Nose?
2. No Plane in the wide shot. They accidentally broadcast the wide shot from Chopper 5. Perfectly consistent with video compositing, as it is not possible to composite in real-time on a zooming shot like that. Other videos show the plane approaching during the time of the Chopper 5 wide shot. How could the hologram appear in some shots, and not in Chopper 5?
3.  The over-under puffball contradiction. Perfectly consistent with a misplaced layer mask in video compositing, how could a real live image appear above the explosion in the Hezarkhani video, and below the explosion in Fairbanks?
4. Unstable motion. The motion of the airplane in Chopper 5 becomes less stable when you stabilize the video. This is perfectly consistent with trying to do real-time compositing on a moving helicopter shot. The motion of a hologram would be smooth, just like a real airplane. How on earth could this motion become less stable after stabilizing the video?
Of course, believing in thin-air holograms gets the guilty news media off the hook. Again.
Posted by Ace Baker at 1:17 AM

Ace....I will pay you or anyone else on the planet $5,000 if you are able to verify a single speck of debris from any of the 4 planes from any of the 4 locations from 9/11. There were no commercial planes on 9/11. Ps.....videos, film, photos, and eyewitnesses have never in aviation history verified either a plane or a plane crash. Only wreckage verifies a plane crash. pps....the photo of debris is not debris...just like the photo of blood will never determine the type. Any takers?!

FBI: Terrorist Attack On Golden Gate Bridge May Have Been Green-Screened

Ace--
Your points are good, and I really don't think they used holograms for the second hit. I have never supported the hologram theory. And John Lear is certainly not to be trusted on this. Fetzer probably is just going along with Lear, possibly because he is a fellow agent or some other reason. I haven't heard Fetzer on this topic so I'm not sure what his reasoning is. Of course, Fetzer happily promoted Wood's DEW, and we know the story on that of course.

But just as a matter of point, the second plane followed the smoke trail from WTC1 for some distance. The smoke trail could have provided a convenient backdrop for projecting a hologram. But the smoke would be too unpredictable to cast a reliable hologram, nor could they predict the prevailing wind that day.

It seems unlikely they would have

Ace demonstrates his claims very well. Hologramers have demonstated no moving holograms in the bright light of day. Even an attempt would be like trying to destroy and anvil with a feather.

So why not composites?

We will believe plane parts when they are spread out and tagged (serial numbers and all) on an old hanger floor.

No one has offered to demonstrate the Pentagon approach.

Spooked, from some angles the plane is nowhere near the smoke, so I don't think it comes close to providing a good backdrop for a hologram.


Eyewitnesses in aviation history have never verified a plane or a plane crash (check out Flt TWA 800 for a recent example that eyewitnesses mean nothing in an aviation investigation). Only wreckage verifies a plane crash. Seems pretty simple. There are over 3 million serial stamped ID’d parts to a standard 767-220R aircraft.

To this day 8 years after 9/11..…not one single piece of debris or wreckage from any of the 4 planes from any of the 4 locations has ever been inspected, analyzed, tested, or verified IN ANY WAY. Not one single piece. You can have 500 trillion witnesses…only wreckage verifies a plane or plane crash. You can have 500 trillion videos and movies…..only wreckage verifies a plane or plane crash. That’s an amazing tidbit especially when you learn that the insurance companies that are now receiving 100’s of billions of dollars in the 2008-2010 bailouts…..paid out $40 Billion dollars within weeks of 9/11 without testing a single piece of debris to verify any of the planes!


“What happened to the passengers?” The US military, corporate, government, and military owned media have spent trillions of taxpayer dollars, killed millions, tortured and maimed 100’s of thousands….and your thoughts are on the 250 from the supposed planes that the world has yet to verify?!!!

There were no commercial planes on 9/11. The world is waking up……..