All fixed wing aircraft produce an effect called “Wake Vortex”. Wake vortex is directly related to the amount of lift generated by each wing. The extremely high air pressure from under the wing collides with extremely low pressure from above the wing to create a strong, tornado-like rotating air mass. This is a stable phenomenon, and it can persist for over a minute. The presence of wake vortex is the reason why even the busiest airports wait at least 5 minutes between landings on a given runway. Wake vortices are always present behind a flying airplane. Ordinarily, of course, they are invisible unless there are clouds, smoke or debris in the air.

Here is a photo of red smoke behind a small crop duster.

And here is a photo of curling cloud patterns far behind a soaring jetliner.

Here is some background research on wake vortex.

Now consider this image from the Naudet video.

This is less than 5 seconds after a Boeing 767 airplane supposedly flew right through this airspace at top speed. Where is the wake vortex? 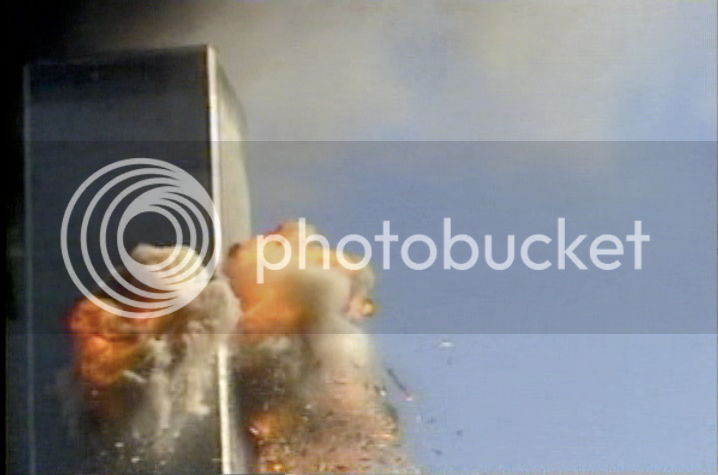 Again, what happened to the vortex? I have watched all the 9/11 airplane videos over and over again, and I invite the reader to do likewise. There is no evidence of the strong rotating air mass we know would have to be there. The obvious and only explanation is that while the explosions are real, the planes are fakes.
Posted by Ace Baker at 12:00 PM

Do missiles create a similar wake vortex? This is my first time hearing of this and I find it very compelling. Taken at face value, does this lack of a wake vortex rule out the possibility of both a jetliner and a missile being used during the attacks?